The ecologist Ramon Margalef: a great scientific bequest ten years after his death

An extensive programme of activities remembers the scientific mastery of Ramon Margalef, the first Spanish professor of Ecology and an international example for many worldwide scientists. 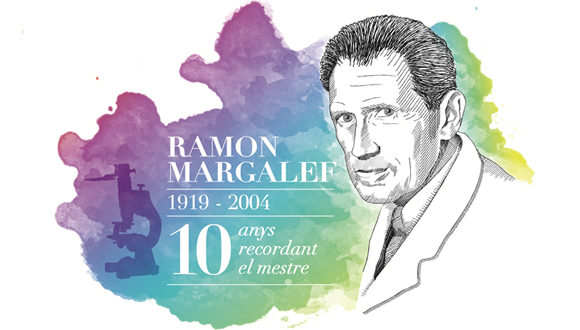 “Intellectualism has not assimilated the deep insertion of man in nature. To say that man does not have any relationship with the rest of life seems to be a defence. This is a basic difficulty to get deeper into ecological problems. The most urgent problems, such as the relationship between ecology and economics, are viewed in a deviated way. Ecology is not completely considered a science, but a type of behaviour code”. These words reflect Ramon Margalef’s thoughts, emeritus professor of UB and an example for many ecologists and naturalists across the country, who died on 23 May 2004.

To commemorate the 10th anniversary of his death, an extensive programme of institutional activities has been organised by the University of Barcelona (UB), the Universitat Autònoma de Barcelona (UAB), the Institute of Marine Sciences (ICM-CSIC), the Institute for Catalan Studies (IEC), the Botanical Institute of Barcelona (IBB), the Academy of the Sciences and Arts of Barcelona (RACAB), the Centre for Ecological Research and Forestry Applications (CREAF), and the Botanical Garden of Marimurtra of Carl Faust Foundation, all them institutions closely related to R. Margalef’s teaching and research career. The programme of activities to honour Ramon Margalef, the first professor of Ecology in Spain and an international example for many scientists around the world, is available on the website Ramon Margalef (1919-2004): 10 anys recordant el mestre.

He published essential works to understand how does nature works, for instance Ecology (1974), Limnology (1983) and Our Biosphere (1997). Dr Margalef was the first scientist who received the Cross of Sant Jordi in 1997, and some years later, in 2003, he was awarded with the Gold Medal of the Government of Catalonia. He was pioneering in developing a high-quality marine research. In 1980, the Bedford Institute of Oceanography (Canada) conferred on him the Huntsman Award for Excellence in Marine Research, usually described as the Nobel of the sea.

Historically, Margalef is considered one of the three most prestigious scientists of the 20th century, together with Santiago Ramón y Cajal and Severo Ochoa, both honoured with the Nobel Prize. He was member of the Biological Sciences Section of the Institute for Catalan Studies, the Academy of the Sciences and Arts of Barcelona. He was also corresponding member in Madrid, Seville, Galicia and of the National Academy of Sciences of the United States. Moreover, Dr Margalef was awarded honorary doctorates from four institutions: Laval University (Canada), Aix Marseille University (France), the National University of Lujan (Argentina) and the University of Alicante (Spain).

Margalef directed the Institute of Fisheries Research (Spanish National Research Council, CSIC) from 1965 to 1967; he created Spain’s first Chair in Ecology at UB in 1967. He was professor of the Department of Ecology at UB from 1967 to 1986 and then emeritus professor. Every generation that has been part of the Department of Ecology of UB has disseminated his superb research work. Many chairs in Ecology at different Spanish universities are held by his disciples and fellows.

The programme of activities that happen in the following months at participating institutions is available on this website.

Espai Margalef: the office of the master

The scientific bequest of the Catalan ecologist is even more visible at the Espai Margalef, an initiative of the Faculty of Biology of UB. The site is opened to the general public and offers a reconstruction of Professor Margalef’s office at the Faculty of Biology; his books, manuscripts, letters, photographs, and other interesting scientific materials are exhibited. The initiative is coordinated by professors Mercè Durfort, from the Department of Cell Biology of UB, and Narcís Prat, from the Department of Ecology of UB, together with the Learning and Research Resources Centre (CRAI) Library at Biology.

To commemorate the 10th anniversary of Dr Margalef’s death, the CRAI Library at Biology also exhibits several scientific publications and different documents from the Ramon Margalef López Collection of UB.

Maria Mir i Tauler: a painter close to Ramon Margalef

The pictorial work created by Maria Mir i Tauler, biologist and Ramon Margalef’s wife, is exhibited at the Animal Biodiversity Resource Centre (CRBA), headquartered at the Faculty of Biology, from April to June.

Maria Mir i Tauler (1925-2004), who died some days after the death of Margalef in 2004, held a degree in Natural Sciences from UB. She accompanied his husband throughout his life and helped him to review manuscripts and carry out other scientific activities. The exhibition, a small tribute to Maria Mir, shows some paintings that illustrate Margalef’s professional career and personal life. The initiative is coordinated by professors Maria Rieradevall, from the Department of Ecology, Antoni Serra, director of CRBA, and Neus Margalef, the daughter of Mr and Mrs Margalef.

Within the commemoration, the expert Josep M. Gili (ICM-CSIC) coordinates the edition of a poster that includes a collection of all the biological species which have been named in honour of Dr Margalef, for instance the microalgae Picarola margalefii, first found in Mediterranean waters. The alga, which belongs to coccolithophores, inspired the sculpture that those awarded with the Ramon Margalef Prize receive. The award was created by the Government of Catalonia in 2004 to honour the scientist’s memory.

On 26 April 2013, the Historic Building of UB hosted the first performance ofRamon Margalef i l’aventura de la vida, a series of dramatized guided-tours that introduces visitors to Ramon Margalef’s life. In the second half of May, the activity, part of Theatrum sapientiae, moves to the Faculty of Biology, centre where Margalef gave lessons for more than twenty years.

The project emerges from the collaboration between the Scientific Culture and Innovation Unit (UCC+i) of the Communication Unit of the UB and the Poetic Music Studies Research Group of the Faculty of Philology, and is supported by the Spanish Foundation for Science and Technology (FECYT) – Ministry of Economy and Competitiveness and the Secretary for Universities and Research of the Government of Catalonia.

The CRAI Library at Biology of UB, the Secretary for Environment and Sustainability of the Government of Catalonia and Amical Wikimedia organise this initiative in order to create and improve Wikipedia’s contents on Dr Margalef, ecology and the environment.