Japan is among the countries that are best prepared for natural disasters, those with the most hospital beds, the highest levels of education, prevention plans, adapted urban designs and so forth. Why, then, is it also one of the countries whose inhabitants are most at risk from such disasters?

An expert in risk would say that a country could change the level of risk its population faces by acting to reduce its vulnerability. When exposure levels are as extreme as they are in Japan, however, the risk remains very high no matter how many measures are taken. As the image below shows, the study of risk is not as straightforward as it might seem. It is actually a complex discipline, one that occupies and preoccupies people across the planet whose work is related to social sciences, statistics and other fields of science. Between them, they develop different risk assessment methodologies, because the ability to calculate risk translates into measures, management decisions and policies which save not only large amounts of money but also, most crucially, many human lives.

When nature is at risk

Human risk is a complicated subject, and the same can be said of the risks to which natural ecosystems are exposed. Two years ago, the research team in which Judit Lecina was working raised a question not unlike that posed in the opening paragraph but applied to forests: how can we calculate the risk of losing forests to wildfire, drought, plagues or extreme wind? Judit, who was writing her doctoral thesis at that time, decided to find a risk calculation method that could be adapted to the case of forests. An initial search proved largely unsuccessful, however. Ecology apparently lacked methods complete enough to establish the level of risk of losing a forest to the most common disturbances. While pondering her next step, Judit came across an IPCC (Intergovernmental Panel on Climate Change) report on climate change-related impacts and vulnerability from 2014, one of the chapters of which broadly defined risk and how to calculate it. According to the IPCC, climate-related risk is the result of the interaction of climate-related hazards (including extreme events and trends in temperature and water availability) with the vulnerability and exposure of human and natural systems.

With that perspective offering a basis to work on, another question arose immediately. Thanks to their knowledge of forest ecology, Judit and her team were able to extrapolate what the hazard level forests must be facing was and what values (or forest services) were exposed to hazards. But how could they define vulnerability?

The researchers felt that answering that question could mark a watershed. Understanding the mechanisms that make a forest more or less vulnerable would enable them to suggest management measures to improve forest protection and reduce risk levels. It was the missing piece of the puzzle. Thinking outside the box, Judit extended her search to other disciplines. That process, which she found stimulating, led her to the socio-economic disciplines, where, in comparison to the environmental disciplines, greater progress appeared to have been made in the field of interest to her. She took particular inspiration from a study that proposed a World Risk Index, providing a means of assessing people’s risk from and vulnerability to natural hazards in individual countries and of comparing countries on a global scale.

The authors of the study had identified a set of key elements for determining a country’s vulnerability to a natural disaster, including its population’s literacy rate, its medical services, access to clean water and the availability of food. They had divided the factors in question into three groups corresponding to a population’s susceptibility to a disaster, its ability to cope with the consequences of the disaster, and its ability to adapt to the disaster through social changes. Each group also included a set of key variables for calculating the risk of being affected by a disaster. “For example, Greece, Japan and Chile, countries with an extremely high level of exposure to natural disasters, are very well prepared in terms of logistics, medical services and education, and that lets them keep the risks under control,” says Judit.

That prompted the team to look for equivalents in the forestry sphere. After a great deal of thought, Judit, Jordi Martínez-Vilalta, Mireia Banqué, Albert Alvarez, Jordi Vayreda and Javier Retana defined the characteristics that influence forests’ vulnerability to the disturbances that can affect them (fire, drought, etc.) and came up with a new framework of reference for studying and assessing the risks associated with such phenomena.

“To do that, we took the main risk and vulnerability concepts defined in the latest IPCC report, and modified and adapted them to the context of forests,” states Judit. “We saw that forest vulnerability has two components: susceptibility, which is related to the immediate effects of a disturbance; and adaptive capacity, which measures the response in the medium term, decades after the hazard’s emergence.”

Risk is defined at three points: before, during and after a disturbance

Before a disturbance, every forest it might affect is deemed exposed to it. However, each forest has a different degree of exposure, depending on the “value” of the ecosystem services (e.g. availability of wood, preservation of biodiversity, water and climate regulation, and opportunities for recreation and education) that would vanish if the forest were lost, and on the magnitude of the hazard it faces (central Catalonia’s forests do not run the same risk of fire as those in the Pyrenees, for instance). “In the case of people, a densely populated island like Japan is much more exposed to population loss as the result of a disaster than a practically uninhabited island,” explains Judit. “Similarly, losing a degraded forest with few quality services is not the same as losing one that has great biodiversity or plays a key role in a particular basin’s water cycle.”

When a disturbance occurs, its immediate effects can be modulated by the characteristics of each forest or of the species (especially trees) to which it is home, as well as by more extrinsic factors, such as firefighters’ capability to tackle wildfire. “Japan is less susceptible to the effects of an earthquake than Indonesia because its infrastructures are already prepared for such phenomena and its emergency system is larger and more efficient,” Judit remarks. “In the case of forests, some are more resistant to fire and will be less affected by flames than others; in Catalonia, that would apply to beech or oak groves, the least flammable forests,” she continues. “They might also be more easily accessible to firefighters, for example. All those kinds of factors reduce their susceptibility.”

Lastly, a forest’s recovery from the effects of a disturbance depends on its adaptive capacity, which the IPCC defines as the ability of systems, institutions, humans and other organisms to adapt to the potential damage caused by a change, to make the most of the opportunities it presents or to act in response to its consequences. “In Japan, people are highly educated and there are economic systems and plans for re-establishing normality after a natural disaster, so things get back to normal relatively quickly,” says Judit. “That is similar to the way an Aleppo pine forest can return to normality 20 years after a fire, through its regeneration strategies and with good subsequent forest management,” she concludes.

Thus, the risk of losing forests and the services they provide depends on a combination of the values exposed to a hazard, each forest’s vulnerability and the scale of a disturbance. The forests with the highest level of risk are therefore those that are most vulnerable (i.e. most susceptible and least capable of adapting to disturbances), provide most ecosystem services, and face hazards of the greatest magnitude. That combination of factors can throw up surprises comparable to the case of Japan, where, despite great adaptive capacity and far-reaching measures to reduce susceptibility, exposure (millions of people) and the magnitude of the hazard (a high probability of natural disasters occurring) are so great that its level of risk as a country remains among the highest in the world. In the forestry arena too, we can now assess the level of risk each forest faces and take the necessary measures to keep it under control. 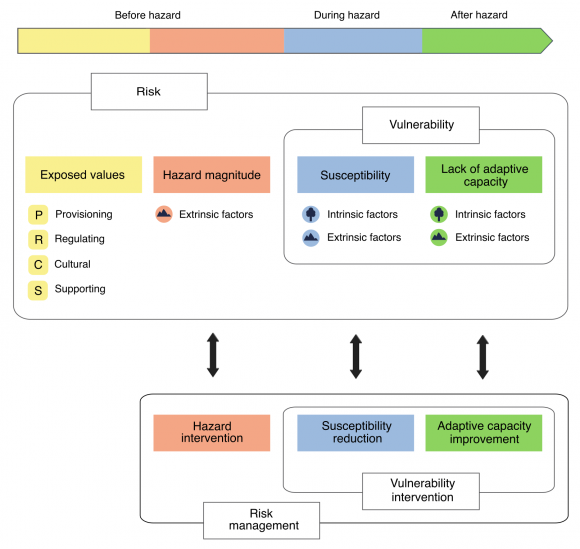 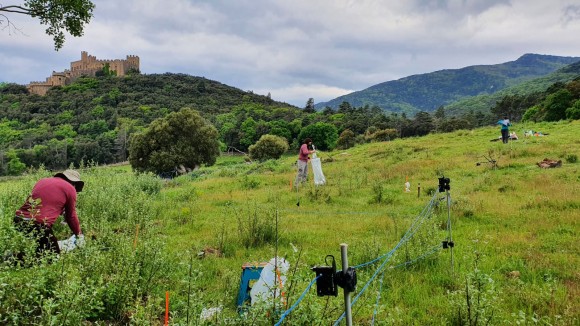