Alba Anadon Rosell, a gentle sight with a forceful speech

Without making too much noise and with an always affable look. Talking to Alba Anadon Rosell you get the feeling that, despite the difficulties, this researcher with a heterogeneous international background always approaches situations in a cordial and affectionate way.

It also seems that her career has been smooth, although it is clear that she has experienced first-hand the ups and downs of a scientific career with an international vocation. “I’m going through a bit of a rollercoaster ride”, she admits,“I find everything very difficult: there are very few positions on offer and there are people with impressive CVs. I love research, but I’ve come to the conclusion that the day I don’t make progress, I’ll do something else. The situation is complex and also has a high personal cost”. A later motherhood than she would have liked to start is the most obvious price to pay.

Research was a destiny for Alba Anadon Rosell right from her first years at university and, for this reason, it was always clear to her that she would spend part of her studies abroad. The reason for this attraction is still being clarified. “Research allows me to ask myself questions, it gives me a lot of freedom, and for that alone I feel lucky. It has also allowed me to do a lot of fieldwork, which I am passionate about”. Testing and taking data in the field is her reference activity, in addition to all the previous work involved: “I’m interested in thinking about experiments, planning projects, proposing research ideas…. Identifying what questions we ask ourselves, what we would like to solve and how we approach it in the field”.

The high mountain scrublands have been the focus of her research until now, an area which she recognises is unusual and which has allowed him to carry out her research with a great deal of autonomy. She joined CREAF in April 2021 in the middle of the Covid19 pandemic to join the team of the researcher Jordi Martínez-Vilalta thanks to a Juan de la Cierva grant and, little by little, she is also starting to get involved in projects linked to forests.

Her interest in subshrub plants arose from her collaboration with professor Josep M. Ninot Sugranyes, to whom she showed her interest in collaborating when she was teaching at the University of Barcelona. “She proposed a project with Vaccinium myrtillus (blueberry) in the Aran Valley and that’s where it all started,” she recalls, amused and melancholic.

“I have often wondered why I like subshrub plants so much and I have come to the conclusion that they allow me to delimit the study area: being small, I can study the aerial parts, the underground parts… and play more than with other systems, which require a lot of funding and infrastructure to achieve certain results”. Their uniqueness is also a point in their favour: “I am attracted by the fact that these systems are little studied in southern Europe, which is not the case, for example, in the north of the continent with the tundra and shrub communities. They are very important, especially in high mountains where, with the progressive abandonment of traditional agricultural and livestock activities, they have been gaining ground and becoming key to ecosystems and to understanding the processes that occur”. 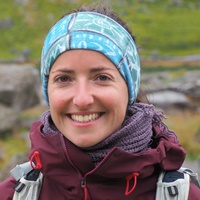 “Subshrub species are little studied systems in southern Europe, something that does not happen in the north with tundra and shrub communities. They are key, especially in high mountains, where they have been gaining ground and are important for ecosystems and for understanding the processes that take place”.

These plant species develop underground stems and are increasingly occupying former pastures. “These are plants that were previously absent from the meadows and can now grow progressively, giving rise to scrubland communities and eventually making their way into the forest. There is a consequent loss of biodiversity when this situation homogenises ecosystems, as a result of large-scale territorial abandonment”.
The impact of the plant on the soil and its feedback is her current field of study. And she has also begun to specify possible new collaborations, one of them with the researcher Oriol Grau in the High Pyrenees Natural Park on abandoned pastures colonised by scrub. “So far I have been studying the plant physiologically, but I would also like to focus on its impact on ecosystems: they are slow-growing, accumulate more biomass and have a recalcitrant litter that is more difficult to decompose and, therefore, the incorporation of carbon and nutrients into the soil is slower”.

Her reality as a researcher is the result of stays and projects in UK, Switzerland, Austria, Norway, Sweden and Denmark, in a long-distance career that goes beyond research. “I have always liked to get involved, to be in contact with people, to get to know the centres where I am,” she explains. For this reason, she has offered to supervise students, to lend a hand and guide pre-doctoral students, to intervene in scientific writing workshops… At CREAF, she is part of the committee of post-doctoral researchers who are driving the new era of CREAFTalks, the series of seminars that bring together global research work in ecological science, both our own and that of others.

Evaluation, the way to obtain public recognition and to evolve in science is also a long way to go. With her usual cordiality and firmness, she explains that the indicators for evaluating scientific careers generate a perverse system. “Basically, we are forced to produce, to be constantly worrying about whether we are doing enough, whether we are producing enough, and that is terrible. She also explains that “the evaluation system perpetuates very unethical behaviour, which sometimes affects people’s mental health”. The procedure, she says, condemns research groups reduced to marginal operation: “from a small group you can’t collaborate and be listed as co-author of 10 articles by colleagues, because there is no such number of colleagues! And that does not mean that you are a worse researcher, but that you have followed another path”.

The quantification of scientific careers based on the number of articles favours a vicious circle, she says, in a well-known clamour in science. “There are valid professionals and very good scientists who have had to dedicate themselves to other tasks. The progressive change in the metrics of scientific evaluation does not seem to solve things much: “sometimes I have the feeling that we are looking for a kind of superheroes capable of taking charge of multiple activities. Isn’t it enough to do good research and manage a team, for example?

A before and after

Having met Josep M. Ninot Sugranyes, her thesis coordinator, is a before and after in Alba Anadon Rosell’s career. “I always say that I have been lucky to have a thesis supervisor who is very human. Beyond science, it is essential to have someone who listens to you, who supports you with academic issues, who you can knock on the door and who supervises your work for pleasure”. And that is her thesis supervisor and co-supervisor, Sara Palacio Blasco. Also answering to this character are Ellen Dorrepaal -her supervisor in Sweden- and Melissa Dawes, to whom she reported directly in Switzerland. “Melissa Dawes was perhaps my first female reference, from whom I learned a great deal”.

She says goodbye, explaining that dance has been an important part of her free time since she was a child, and that during her postdoctoral stay in Germany she attended classical ballet and contemporary dance classes. “I’ve tried everything: classical, musical theatre, claque, modern and contemporary dance“. Her current teacher is too acrobatic for her gestational state… “I give my all in class and I’m a little afraid of going overboard now”. Undoubtedly, motherhood will also mark a before and after.