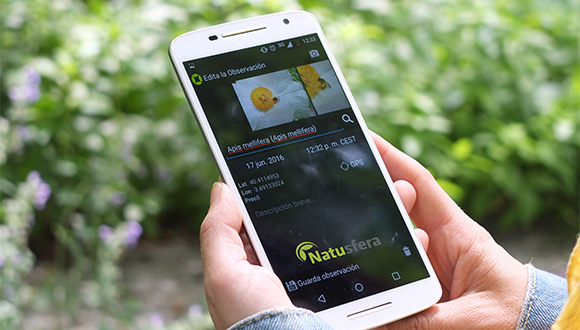 A new study published in the journal Biological Conservation reaffirms the key role of citizen science for biodiversity conservation, encouraging further contributions along these lines. “Currently citizens provide a large amount of biodiversity data which are useful in science, but this information has an even greater potential for evaluating biodiversity on a regional and global scale,” explains Bernat Claramunt, researcher at CREAF and the UAB and one of the authors of the study. In fact, over 50% of the data in the Global Biodiversity Information Facility (GBIF) already originates from citizen science

Biodiversity is essential for humans and the planet, and “it is necessary to protect it from the constant threats of human activities since so many environmental services are derived from it such as pollination, pest control, and protection from environmental disturbances,” says Claramunt. In order to ascertain the condition of biodiversity, it is necessary to closely monitor different indicators across the planet, including indicators of phenology, migratory behavior, bioindicator species, population age structure, and species distributions.

Unfortunately, such information is not always available. To deal with this problem, the study identified what types of data are most common from citizen science projects and which are normally lacking. “A lot of the data are about species distribution – if a specific species is present or absent at a location.  But there are other variables for biodiversity which we don’t get from citizen science but are only obtained from the observations and measures taken by scientists such as demographics and characteristics such as organism body mass,” explains Bernat Claramunt. For such reasons, citizen science cannot be viewed as a substitute for the work of the scientific community, but rather as a valuable accessory for improving understanding of certain aspects of biodiversity conservation.

Birds, butterflies, and mushrooms have benefitted most from citizen science

The study also finds that the group currently benefitting most from citizen science is birds, followed at a great distance by fungi and butterflies.  However, “we have seen that the representation of certain groups is not homogenous at the global scale, just as citizen science is at varying degrees of establishment across the world,” says the researcher. For example, citizen science contributes a lot of data in the United States, Australia, and some European countries. However, in many other parts of the world, including areas with very high biodiversity, citizen science projects are still scarce.

For this reason, Claramunt adds that it is important to promote citizen science since “the more data and people involved, the easier it is to have information about rare species.”  This can be especially useful in the detection of invasive species, even to the extent that citizen science projects can be converted into early alert systems for biological invasions.

The state of citizen science in Catalonia and Spain

In Catalonia, birds are also the best-represented group thanks to initiatives such as Monitoring Common Birds in Catalonia (SOCC for its Catalan acronym) organized by the Catalan Institute of Ornithology (ICO), and SEO/BirdLife Spain. Programs such as these suggest the potential for citizen science to expand into regions where it is not yet established.  “Here the trend has been good, there has been a huge boom” says Claramunt.  He adds, “since GBIF Spain has high hopes for the project Natusfera, it has organized a number of conferences about citizen science in different Spanish regions.”

Despite some positive signs, Bernat Claramunt points out that “there are problems with resource availability, technical needs, and requirements for new databases.”  In fact, according to the CREAF and UAB researcher, one of the priorities recognized worldwide is to facilitate communication between the multitude of citizen science platforms and projects, to develop a common language.  “We need to make the projects compatible and standardize the type of data they gather, so that all projects have the same structure and rules in order to classify the data and find it more easily.”

CREAF recognizes the potential for citizen science and has ongoing projects which are largely based on this on this resource, including Mosquito Alert, Fenodato, or Natusfera, the latter of which Claramunt is the principal investigator