Farmland with small fields and varied crops is beneficial to biodiversity

Research led by two French institutions shows that farmland comprising small fields sown with different types of crops is conducive to plant and animal diversity. Promoting such landscapes would help make up for the loss of natural and semi-natural habitats between crops.

A study led by France’s National Institute for Agricultural Research  (INRA) and National Centre for Scientific Research (CNRS) has broken new ground by showing, on a very large geographical scale, that creating an agricultural landscape with small fields and different types of crops is conducive to plant and animal diversity. Doing so could be a way of dealing with the loss of natural and semi-natural habitats between crops.

The results of the study have just been published in the journal PNAS (Proceedings of the National Academy of Sciences of the United States of America). Those involved in the study include Lluís Brotons, a CSIC researcher and member of the InForest research unit run jointly by CREAF and the Catalan Forest Science and Technology Centre (CTFC); the CTFC researchers David Giralt, Gerard Bota and Assu Gil Tena; the University of Lleida researchers Jordi Recasens, Xavier O. Solé-Senan and Irene Robleño; CREAF researcher Jordi Bosch; and José Antonio Barrientos, professor of zoology at the Autonomous University of Barcelona. Researchers from the University of Alicante, the University of Murcia and Rey Juan Carlos University also contributed to the study, as did members of research centres from Canada, Germany, Hungary, Sweden, Switzerland and the UK.

The authors of the study suggest boosting plant and animal diversity by promoting agricultural policies aimed at reducing the size of crop fields and diversifying crops on farmland. As Xavier O. Solé-Senan underlines, a complex crop mosaic is beneficial to biodiversity and keeps land productive; additionally, it makes the recovery of productive landscapes with a far greater level of resilience possible. Having natural and semi-natural vegetation on farmland complements the effect of such a mosaic and is another useful means of encouraging biodiversity. “Reducing field size from 5 to 2.8 ha is as beneficial as increasing the proportion of semi-natural habitats from 0.5 to 11%”, reports Lluís Brotons.

The study also shows that land management decisions made by local farmers and cooperatives have a major impact on biodiversity. “Heterogeneity on a more local level is a key factor in the variation in the biodiversity levels that we observed during the study”, points out David Giralt.

The international research team reached its conclusions by running a large-scale study that involved 30 laboratories and a single empirical approach in 8 regions of Europe and Canada. One of the regions in question was in the drylands on Lleida’s plain (Urgell, Segarra and Garrigues) and the team responsible for it was coordinated by Lluís Brotons. Overall, the researchers monitored 1,305 cultivated fields in 435 1-km2 areas of farmland, and identified more than 167,000 specimens of 2,795 species spread across 7 taxonomic groups (birds, butterflies, bees, hoverflies, spiders, ground beetles and plants). They then calculated a synthetic index integrating their data on the 7 taxonomic groups to determine the level of agricultural biodiversity of each of the 435 areas of farmland.

“Compared to farmland elsewhere in the world, Catalonia’s crop fields are relatively small and the crop species cultivated in them vary relatively little”, states Jordi Bosch. “To boost biodiversity, it’s very important that we avoid large-scale monoculture and promote the coexistence of different crops in each landscape”, he adds.

The relationship between greater biodiversity and smaller fields with more varied crops was clearest in the case of the farmland in Lleida monitored for the study. Bearing that in mind, says Gerard Bota, “simplifying agricultural landscapes in this part of Catalonia could have an extraordinarily negative impact, owing to their high level of singular biodiversity and the presence of many at-risk species”. To illustrate his point, he mentions that species of spiders never previously recorded in Catalonia were detected during the study.

The study leaves no doubt as to the value of small crop fields, which have a positive effect on biodiversity even when there is no semi-natural vegetation between them (e.g. bushes, wide grassy strips or rows of trees). “A highly varied collage of crops boosts agricultural biodiversity too, because different types of crops often harbour different species and provide complementary resources necessary for their survival”, explains Jordi Recasens.

Another important finding from the study, in the words of Irene Robleño, is that “crop diversification is especially beneficial when more than 11% of an agricultural landscape consists of semi-natural habitats, which was the case of half of the areas of farmland we sampled”. 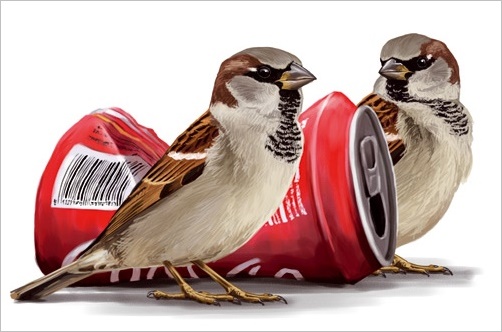