For the first time, two phenomena that occur in different seasons are connected: the high temperatures advance and extend springs, so that the vegetation grows more intensely and absorbs more moisture from the soil. The consequence is much drier and warmer summers.

With climate change-induced warming bringing spring forward and extending the season’s duration, plants’ growth period is beginning earlier and lasting longer too. Green foliage is therefore taking more and more water from the ground, and the evaporation of that water intensifies moisture loss. The main consequences are longer, hotter, dryer summers and more frequent heatwaves in much of the Northern Hemisphere. Despite the two phenomena taking place in different seasons of the year, a study entitled Summer soil drying exacerbated by earlier spring greening of northern vegetation, published in the journal Science Advances, has shown that they are connected.

The study was led by Xu Lian from Peking University (China), and involved Josep Peñuelas, a CSIC researcher based at CREAF (Spain), as well as researchers from Australia, Belgium, France, Germany, the UK and the USA. 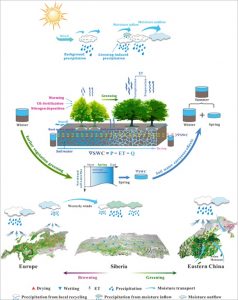 Analysing satellite and climate simulation data on the entire Northern Hemisphere between 1982 and 2011 enabled the scientists to link increased greening in spring with reduced soil moisture in summer, a finding that climate simulation computer models support. “The influence of early greening on soil dryness is more complex than we thought”, says Xu Lian. “This phenomenon causes water to be lost very rapidly by transmitting it into the atmosphere in large quantities”, he continues. “The water lost is then returned in the form of precipitation over the Earth though. We’ve shown that this mechanism mitigates water losses caused by greening; if it didn’t, the drying of the planet’s surface would be much more severe.”

According to Josep Peñuelas, the study highlights “a positive reaction that often goes unnoticed: an increase in greenhouse gas concentrations and the warming it entails are causing a shift in plant phenology towards earlier leafing, which is reducing soil moisture in summer and compounding the extreme summer temperatures for which global warming is directly responsible”.

A change in climate pattern

The effect of the situation in question is not uniform throughout the Northern Hemisphere. For example, central Siberia and certain European croplands are benefiting from a higher-than-usual rate of precipitation thanks to the evaporation of water to their west. The conclusion is that the evaporated water is taken over the Urals by air masses blown from west to east and then falls as rain on the aforementioned locations.

One of climate research’s main challenges is to explain what is behind the extreme situations we are experiencing nowadays, such as the recent droughts in northern latitudes. The interseasonal processes the study deals with “could be a factor in current extremes and can be expected to place additional pressure on soil moisture in the summer and terrestrial ecosystems as the climate changes”, remarks Chris Huntingford from the UK Centre for Ecology and Hydrology.

Among its numerous consequences, soil drying can raise local near-surface air temperatures and trigger and worsen heatwaves. On the basis of climate simulations, the study calculates that soil drying due to spring starting earlier could increase the number of extremely hot summer days by one per decade and push the maximum temperature up by 0.07°C per decade. Although these changes may seem relatively minor, the severity of the heatwaves likely to occur in four or five decades will underline just how significant they are.